What does it mean, in the 21st century, to dedicate one’s academic, practical, artistic, voluntary work to habitat? In a century often described by the fashionable but vague adjective “urban”? And, by the way, does “habitat”mean anything at all in a world characterised by spreading homelessness, be it chosen or forced? For Habitat Forum Berlin such questions are unavoidable; indeed, they ensure its position vis-à-vis continuous developments is regularly updated.
But they are just as pressing for all those who look at the present state of habitation worldwide with concern and anger.

The questions that confront “habitat-experts” daily are, however, rather technical and intervention-oriented: How to dispose of the waste of increasingly consumerist urban middle classes in newly industrialising countries? …how to accommodate masses of urban poor? …how to restore villages destroyed by natural disasters as quickly as possible (and in a participatory way, please!)? In the name of science, those experts came up with a variety of issues – housing (the poor), infrastructure, management, ecological architecture, sustainability, etc. –, created specific fields of activity, and set up different institutions to be responsible for them. Considering the dimensions of the challenges faced by megacities and rural areas undergoing severe transformations as a consequence of industrial agriculture and industrialisation in general, this pragmatism, this search for efficientsolutions, could appear legitimate or even necessary. Yet what is being de facto produced are quick fixes at low costs (in terms of time, space, money) and theoretically appealing and supposedly repeatable “best practices” for annual reports and presentations. In other words, we are facing the global expansion of what Henri Lefebvre described as a problem of Western European urbanism back in 1966 – the reduction of a complex function of human life to “housing”, or the “owning” of a certain space in which to organise one’s private life. At any rate, the historically evolved and evolving anthropological fact of “dwelling” has long disappeared from the foreground: we are working on “habitat”.

Where does this problem originate? Does it lie in a “recycled” 19th-century belief in progress, of the type carried on, with slight modifications, by modernism and urbanists like Corbusier? No. Historical events and intellectual movements, among them also the debates led by architects in the 1970s, deconstructed this myth in the course of the 20th century. Beside scientific relativism and poststructuralist philosophy, postcolonial theory with its critique against the application of western ideas in former colonial countries contributed to the endeavour. The problem is deeper, it is in fact related to the difficulty in detaching ourselves from the postulate that “progress” and “development” are the ultimate aims of human beings’ actions. Looking at worldwide transformation processes, we have meanwhile acknowledged that progress has different speeds. But this realisation is accompanied by a negative judgement, particularly evident in discussions on the “responsibility” that the “global community” should assume for“developing countries”. What is actually so disturbing about the different speeds of progress?

Regrets about varying speeds of progress can only stem from an ideal of equally developed and synchronously advancing progress. This way of thinking has two flaws: First, it uncritically establishes the level of development in ‘developed’ countries as the universal canon and index of progress. This legitimises the bilateral agreements on development cooperation with their dubious ends, achievements and beneficiaries. Second, the implicit assumption that humanity would proceed at the same pace in the same direction, if only the existing disparities could be removed, is anthropologically contestable and politically naive. It underestimates the relevance of cultural values and specific local circumstances for social processes, whilst also ignoring the dependence of one side’s progress on the underdevelopment of the other side.
This translates into the paradox that although “difference” – essentially present between and, at times, even within individuals, lifestyles and ways of thinking, as well as in stages of development and speeds of progress – is universally celebrated, global homogeneity is actually being realised. 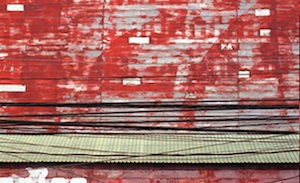 The bias of progress

The difficulty is comprehensible. On the one hand, in a part of the world, progress has been regarded as the basic precondition of human existence for many generations: progress is “necessary”. Hereby, it is easier to assess the contribution of postcolonial studies in favour of a re-thinking of global hierarchies and a stronger consideration of specific socio-cultural circumstances in Western science and practice, than to evaluate their actual success in fostering a discussion on what is “good”, necessary and desirable in the former colonial countries. It thus appears that the problem is rooted in the West’s continued dominant role in forming global representations.
On the other hand, the ambition to reflect on human existence here and now, from an overall but at the same time differentiated perspective, is a real challenge. The concept of “transitoriness” has seemed to offer a provisional help in this sense: in a world understood spatially and no longer just historically, dimensions must be replaced by directions, sizes by forces (or force fields) and defined spaces by vectors. Nonetheless, highlighting the coexistence of different speeds, unequal developments and stages of development within such “transitoriness” will not solve, but in fact only shift the necessary although problematic confrontation with difference. On a philosophical level, the result of this “shifting” or postponing of such confrontation is a “homogenisation” of the concepts of time and space: no consistent analyses of their essence and interrelationship has followed to the insight that they cannot be considered separately from each other. On a practical level, the conceptual blurring substantiates the belief that everything will be alright, we just need to accept it’s a transitional phase (and in the nasty moments, when optimism crumbles, one can always get back to the good old “tranquillisers”: passable, and lucrative, technical solutions…). As a matter of fact, however, the concept of “progress” along with the business conducted in its name remains unchallenged. 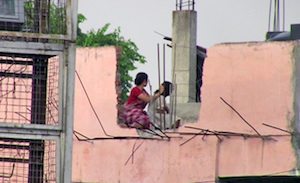 The “essence” of dwelling

The described problem is embedded in a way of thinking based on functions – which necessarily distracts us – rather than in a search for the essence of things, which could provide important impulses for the confrontation with difference. Inasmuch as this is a conceptual problem, it is also a linguistic one.
On the journey to the essence of things, let us consider the essence of dwelling. We search in language, following Martin Heidegger. 1) Dwelling is building, since building is only possible thanks to a concept of what it means to dwell. Such a statement reverses, on the basis of an etymological observation, the common view according to which building provides the “hardware” and dwelling corresponds to filling this “hardware”. In fact bauen, to build, as well as meaning “raising up edifices” also means the way in which we humans are on the earth, i.e. cherish and protect, preserve and care for. 2) wohnen, to dwell, adds to this meaning a quality of such “being on the earth” of human beings, that is, to be at peace, to remain at peace within the free sphere that safeguards each thing in its nature. 3) Before they fulfil precise functions, built things or buildings gather, i.e. they allow a site for the formation of relations among human beings and between human beings and their environment. In their essence, buildings are actually guardians and preservers – that is precisely what it means to dwell.
Rather than involving the progress of technique, building implies allowing human beings to dwell on the earth at peace. 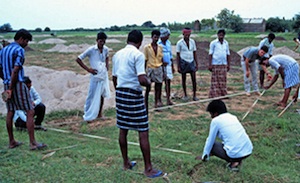 Building, following Heidegger, succeeds according to ameasure-taking, as it “takes the measure” for the sake of architectonics, of the structure of dwelling; and in this sense, it is poetic. Hereby, not a mere gauging with measuring rods for the making of plans is meant, but a building that is essentially practiced to allow dwelling, i.e., that allows forprocesses of appropriation and formation. Who defines this measure? Architects? Urban planners? Experts of development cooperation, sociologists, anthropologists? Not primarily: in a world increasingly understood as cosmopolitan and “ready” for difference their task should be another one. They should observe, document, analyse, tell, how we live, how we dwell, that is how we are on the earth, without pretending to provide exemplifications of constants and variables that can only be simplistic and normative.
In the 21st century, to dedicate one’s work to habitat must mean to make habitat a radical, encompassingdebate. This implies that students, politicians and eventually the entire public sphere in the West should be made aware of the living conditions of urban poor (but not only theirs) in megacities of the “Global South”. And more than that: why shouldn’t the same urban poor (and beyond them) also be interested in and want to learn about how different people dwell in Western countries? In every issue about dwelling (as well as about life) – no matter if regarding the claim for citizens’ “right to the city”, or democratic urban design, or the “measure” of dwelling, or again whether to follow or to refuse different ways of life – our primary concern must be to give an intuition, an idea of the possibility of various alternatives among which to choose freely. If we understand the city as the place where differences become known, are acknowledged and put to the test, in this “urban century” it could be possible that inhabitants of urbanising regions become more and more acquainted with alternatives and can actively discuss, compare, choose (or abandon) them on the basis of an informed debate.
The occupation with habitat, here redefined as a practice that allows for free and informed building and dwelling, is anything but obsolete: on the contrary, it enables the study of the conditions of the “being on the earth” of human beings in all its mutations and mutability. For Habitat Forum Berlin, this requires a profound understanding of urban and in general urbanisation processes in their shiftings, transpositions but also ruptures that question dominant methods and models of development.

Coming finally back to the question of “humane” habitat, dwelling is only humane when those who dwell are at peace, safeguarded and protected.